Neurosurgeons use a variety of diagnostic tests to help identify the specific nature of your neurological injury or disorder. In turn, the results of these tests help the neurosurgeon plan an appropriate course of treatment. Following are descriptions of some of the most frequently performed diagnostic tests by neurosurgeons.

The computed tomographic scan (also called a CT or CAT scan) uses an x-ray beam and a computer to generate 2 dimensional images of the body. The information is displayed in a cross-section or “slice” of body tissue. Neurological CT scans focus on the head or spine.

CAT scans can help detect spinal stenosis (narrowing) or a herniated disc. They can assist in locating brain damage in patients with head injury, detect a blood clot or bleeding in patients with a stroke, detect certain brain tumors, illuminate enlarged brain ventricles (cavities) in patients with hydrocephalus, assist in planning radiation therapy for cancer of the brain, or detect bleeding in a patient with a ruptured or leaking aneurysm. CT can clearly show even the smallest bones of the body as well as surrounding muscle and blood vessels. This makes it invaluable in diagnosing and treating cranial and spinal problems.

CT scanning is fast, painless, and simple and involves little radiation exposure. If contrast material is injected, patients may experience a warm, flushed sensation or experience a metallic taste in their mouth for a few minutes. The CT scanner is a large, square machine with a donut-like hole in the center. The patient lies on a table that can move up or down and slides into and out of the center of the hold. The patient”s body may be supported by pillows to help hold it still and in the proper position during the scanning process. Inside the machine, an x-ray tube on a rotating gantry moves around the patient”s body to produce the images, making clicking and whirring sounds as the gantry moves. A CT scan usually takes from 15 minutes to 30 minutes; a CT exam of the head and brain can take between 10 and 45 minutes.

MRI and MRA(Magnetic Resonance Angiogram) are done by a machine that uses radiofrequency energy and a strong magnetic field to provide detailed images of internal organs and tissues. The image results from the different water concentration of the various tissues. No radiation exposure is involved. The conventional MRI machine consists of a closed cylindrical magnet in which the patient must lie totally still for short periods of time. MRI causes no pain, but some patients do find it uncomfortable and even claustrophobic. However, newer, more patient-friendly MRI systems are now in increasingly widespread use. Depending on the part of the body being examined, a contrast agent may be used to enhance the visibility of certain tissue or blood vessel. This is administered via a small needle connected to an intravenous line placed in vein in the arm or hand. An MRI/MRA is a non-invasive procedure and can take from 15 minutes to approximately one hour to complete, depending on the part of the body being imaged.

MRI can be used to identify and monitor tumors of the brain and spinal cord. It can also measure small metabolic changes in the active part of the brain and therefore be used to map those parts of the brain that handle critical functions such as thought, speech, movement, and sensation. It can also document changes in chronic disorders of the nervous system such as multiple sclerosis. It is also a useful diagnostic tool for identifying diseases of the blood vessels as well as stroke. It is commonly used for patients with diseases of the pituitary gland. It is also widely used to diagnose sports-related injuries and is useful in documenting brain abnormalities related to dementia or seizures. MRI can also detect tissue abnormality in patients with diseases of the eye or inner ear.

Because the MRI can give such clear pictures of soft-tissue structures in and around bones, it also is the most sensitive exam available for spinal problems. It is particularly helpful in identifying stenosis (narrowing of the spinal canal) and herniated discs. The MRI can be critical to planning surgery, radiation therapy, treatment for stroke, or other interventions to treat brain disorders. The MRA demonstrates blood vessels in the neck and brain and can help detect abnormalities.

For an MRI of the head, the patient is placed on a sliding table and a radio antenna device called a surface coil is positioned around the upper part of the head. The patient is then positioned inside the MRI gantry. The MRI exam will generally take from 15 to 45 minutes.

The functional MRI looks at how the brain is actually functioning by identify regions of increased brain activity. Increases in microscopic vessel size, chemical changes, or heat production are all signs that a particular part of the brain is processing information and giving commands to the body. For this test, the patient performs a particular task while the imaging is taking place. The metabolism in the area of the brain responsible for that task will increase, and the signal in MR image will change. By performing specific tasks that correspond to different functions, it is possible to locate the area in the brain that governs that function. This information is helpful to a surgeon so that he/she can avoid those important areas during surgery. The patient lies on a sliding table with his or her head in a brace designed to hold the head still, then is slid under or into the cylindrical magnetic unit which creates the image. As the test progresses, the patients will be asked to perform various tasks, such as tapping the thumb of one hand against each of the fingers in that hand. 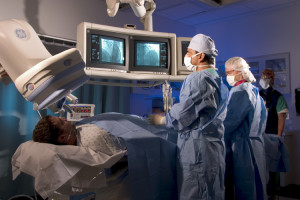 During this test, a series of regular x-rays are taken as a radiopaque (impenetrable by x-ray) contrast material (dye) is injected directly into an artery. The resulting radiographic image is like a map of the blood vessels. An angiogram is an accurate way of looking at arteries and veins of the head, neck and brain, and provides information that cannot be obtained with other tests. It is often used to determine the degree of narrowing of an artery in the head or neck. It can also be used to detect the location and size of aneurysms and vascular malformations. This is an invasive test, requiring a physician to insert a catheter into the major artery near the groin and direct it “upstream” to the arteries near the brain. 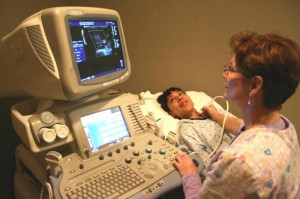 This is a basic imaging test to judge the health of the carotid arteries and is done as part of an assessment of a patient”s risk of stroke. It is a non-invasive test that takes about 15 to 20 minutes. The patient reclines on an exam table and the physician passes an electronic hand-held device over the body area of concern, pressing the device directly across the skin. The device transmits sound waves that are reflected from the structures in the neck and reconstructed into a picture of the outsides and inside of the artery walls. The Doppler can also use changes in the reflected sound waves to determine the velocity of blood flow through the artery. Just like stepping on a garden hose, a high velocity implies a narrower vessel. The Doppler ultrasound usually can only visualize arteries in the neck.

This test is used to learn more about the functioning of peripheral nerves (those in the arms and legs). It can tell if a nerve is pinched, and give an estimate of how severely, and where it is compromised. An EMG tests for the electrical impulse coming from the brain and/or spinal cord to the affected area. If that impulse is blocked somewhere along the spinal pathway, it may be delayed or reduced enroute to its final destination (skin, muscle, finger tips, etc.) Therefore, abnormal function could mean there is nerve injury or muscle dysfunction.

Muscles receive constant electrical signals from properly functioning nerves, and in turn they broadcast their own electrical signals. During an EMG, the electrical activity in muscles is measured. The doctor places very thin needles (like those used in acupuncture) into the muscles to record the electrical signal from the various leg or arm muscles. If a muscle doesn”t receive adequate impulses from its nerve, it broadcasts signals that indicate the muscle is confused.

The results of this test are usually correlated with the results from the Nerve Conduction Study, allowing the doctor to determine which nerves are pinched and the degree of malfunction

This is a sensitive test usually done in conjunction with an EMG. It utilizes electrical stimulation of a specific nerve or nerves and records the nerve”s ability to transmit an impulse. This study can determine that a nerve is functioning normally.

During this test, electrode patches are placed along the known course of the nerve. The nerve is then stimulated with a tiny electrical current at one point. A nerve should then transmit the signal along its course so that an electrode placed further done the arm or leg captures the signal as it passes. A normally functioning nerve will transmit the signal faster and stronger than a sick nerve.

he results of this test are usually correlated with the results from the EMG test, allowing the doctor to correlate which nerves are pinched and the degree of malfunction. Nerve Root Block: Nerve roots exit the spinal cord and form nerves that travel into the arms or legs. These nerves allow movement of the arms, chest wall, and legs. These nerve roots may become inflamed and painful because of irritation from a bony spur or herniated disc in the spine. This test provides important information about which nerve is causing pain by temporarily numbing the nerve root of concern. If the patient”s pain is reduced after the injection, that nerve is most likely causing the pain. If the pain level is unchanged, that nerve is most likely not causing the patient”s pain. By confirming or eliminating the exact source of pain, the test allows the physician to develop appropriate treatment, which could include further nerve blocks and/or surgery.

This test is similar to a myelogram, which utilizes contrast or x-ray dye to better visualize the spinal canal and nerve roots in the spine. This test can be performed to determine problems in the cervical, thoracic and lumbar spine. Regardless of what area is to be studied, the physician first applies a numbing medication to the skin. Then, using x-ray guidance the physician injects a very low dose of intrathecal contrast (dye) into the patient”s spinal sac (where the spinal fluid is located). Regardless of what level of the spine is to be studied, the contrast is injected in the lower back and then the patient is moved into a position that enables the flow of contrast to reach the area of interest. Contrast is heavier than water. The patient then undergoes a CAT Scan of the portion of the spine under scrutiny. The CAT Scan takes approximately 45 to 60 minutes to complete. 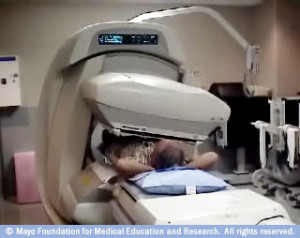 This is a test which uses small amounts of radioactive isotopes (radionuclides) to measure cellular and/or tissue metabolism. Radionuclides are absorbed by healthy tissue at a different rate than tissue that is diseased.A SPECT Scan is used to determine blood flow to tissue, which helps discover how well and organ may be working. It is very sensitive and useful in detecting stress fracture, spondylosis (a degenerative disease of the spinal column, infection (such as discitis), and tumor. As with a PET Scan, a radionuclide is injected intravenously into the patient and it circulates through the blood. A camera then rotates around the patient, picking up images cast by the radionuclide. The information is then transferred to a computer that converts the data into film images. The images are projected as cross-sections of the body and can be visualised in 3d format.