Spinal column is a stack of many bones in your back. It starts from the base of the skull bone and ends in the lower most part of seating bone called the coccyx. It is highly mobile in its upper and lower ends that is cervical and lumbar ends. Each of these bones are separated from one another by intervertebral discs or simply ‘discs’ which act as shock absorbers for your back. The spinal column is made up of cervical, thoracic, lumbar, sacral and coccyx bones. The spinal cord runs in the centre of the bone called ‘spinal canal’. Spinal cord begins at the base of skull and ends near L1 vertebra. 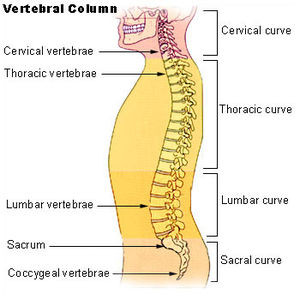 Spinal cord has many roots attached to it. These nerve roots are responsible for all the movements and sensations the body deals with. These roots exit the spinal bones through ‘spinal foramina’, small cavity in the sides. 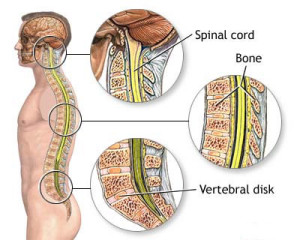 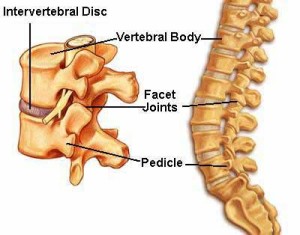 The pedicles are two short rounded processes that extend posteriorly from the lateral margin of the dorsal surface of the vertebral body. They are made of thick cortical bone. 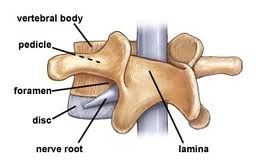 The laminae are two flattened plates of bone extending medially from the pedicles to form the posterior wall of the vertebral foramen. The Pars Interarticularis is a special region of the lamina between the superior and inferior articular processes. A fracture or congenital anomaly of the pars may result in a spondylolisthesis. 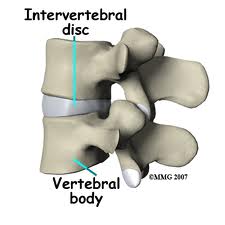 Intervertebral discs are found between each vertebra. The discs are flat, round structures about a quarter to three quarters of an inch thick with tough outer rings of tissue called the annulus fibrosis that contain a soft, white, jelly-like center called the nucleus pulposus. Flat, circular plates of cartilage connect to the vertebrae above and below each disc. Intervertebral discs separate the vertebrae, but they act as shock absorbers for the spine. They compress when weight is put on them and spring back when the weight is removed.

Intervertebral discs make up about one-third of the length of the spine and constitute the largest organ in the body without its own blood supply. The discs receive their blood supply through movement as they soak up nutrients. The discs expand while at rest allowing them to soak up nutrient rich fluid. When this process is inhibited through repetitive movement, injury or poor posture, the discs become thinner and more prone to injury. This may be a cause of the gradual degeneration of the structure and function of the disc over time. 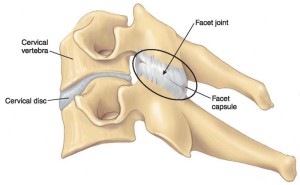 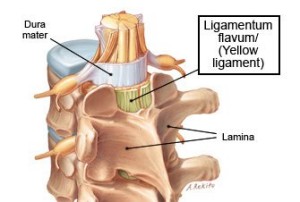 The ligamentum flavum is a strong ligament that connects the laminae of the vertebrae. The term “flavum” is used to describe the yellow appearance of this ligament in its natural state. The ligamentum flavum serves to protect the neural elements and the spinal cord and stabilize the spine so that excessive motion between the vertebral bodies does not occur. It is the strongest of the spinal ligaments and often has a thinner middle section. Together with the laminae, it forms the posterior wall of the spinal canal.

The spinal cord is part of the central nervous system of the human body. It is a vital pathway that conducts electrical signals from the brain to the rest of the body through individual nerve fibers. The spinal cord is a very delicate structure that is derived from the ectodermal neural groove, which eventually closes to form a tube during fetal development. From this neural tube, the entire central nervous system, our brain and spinal cord, eventually develops. Up to the third month of fetal life, the spinal cord is about the same length as the canal. After the third month of development, the growth of the canal outpaces that of the cord. In an adult the lower end of the spinal cord usually ends at approximately the first lumbar vertebra, where it divides into many individual nerve roots (L1). 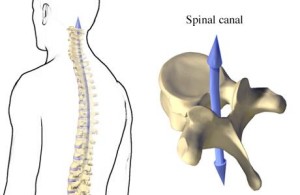 The spinal canal is the anatomic casing for the spinal cord. The bones and ligaments of the spinal column are aligned in such a way to create a canal that provides protection and support for the spinal cord. Several different membranes enclose and nourish the spinal cord and surround the spinal cord itself. The outermost layer is called the “dura mater,” which is a Latin term that means “hard mother,” indicating that early anatomists had at least a rudimentary sense of humor. The dura is a very tough membrane that encloses the brain and spinal cord and prevents cerebrospinal fluid from leaking out from the central nervous system. The space between the dura and the spinal canal is called the “epidural space”. This space is filled with tissue, vessels and large veins. The epidural space is important in the treatment of low-back pain, because it is into this space that medications such as anesthetics and steroids are injected in order to alleviate pain and inflammation of the nerve roots.