The concept of stereotactic brain surgery is simple. This technique uses images of the brain to guide the surgeon to a target within the brain. A colorful term for this surgery is neuro-navigation! This technique may utilize an external frame attached to the head (frame-based) or imaging markers attached to the scalp (frameless or image-guided surgery) to orient the surgeon in his approach. The term “stereotactic” was coined from Greek and Latin roots meaning “touch in space.” 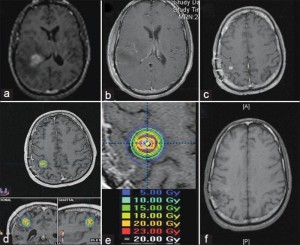 A stereotactic brain surgery is a surgical procedure where lesion is managed with assistance of image guidance, that is previously obtained radiological images. This helps in guiding the surgeon to the exact location of the lesion to facilitate as accurate a pathway through the brain. Then the surgeon performs the procedure while leaving the normal, healthy brain relatively intact. 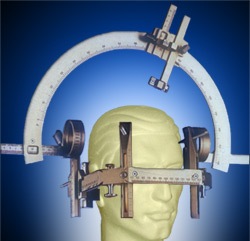 Stereotactic brain surgery is performed with a computer system that integrates previous imaging, usually a special MRI or CT performed one or two days before the surgery. This image is imported into the computer system that provides us with a 3-dimensional image of your brain and our intended target while we are in the operating room. We use this image, along with instruments that show us exactly where we are in the brain as we work to guide our removal of the target lesion.

Stereotactic brain surgery gives us the added advantage of planning as an small incision as possible over the target area of interest. This generally results in smaller incision, which results in better wound healing and smaller scars. 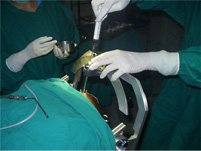 A common example is stereotactic brain biopsy. Deep tumors within the brain may be difficult and dangerous to approach by an open operation. Using a stereotactic biopsy apparatus fixed to the head frame and adjusted to the target coordinates, a biopsy probe is passed through a small hole in the skull to sample tissue for diagnosis.This technique is also used to place electrodes in the deep brain to treat movement disorders such as Parkinson’s disease. 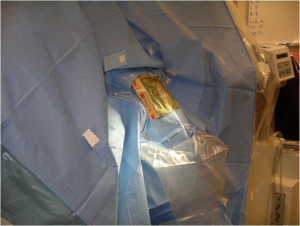 The stereotactic apparatus uses a set of three coordinates (x, y and z) in an orthogonal frame of reference (cartesian coordinates), or, alternatively, a polar coordinates system, also with three coordinates: angle, depth and antero-posterior location. The mechanical device has head-holding clamps and bars which puts the head in a fixed position in reference to the coordinate system (the so-called zero or origin). In small laboratory animals, these are usually bone landmarks which are known to bear a constant spatial relation to soft tissue.