Know your brain and spine

You have been entrusted with the care and feeding of the most extraordinary and complex creation in the universe. Home to your mind and personality, your brain houses your cherished memories and future hopes. It orchestrates the symphony of consciousness that gives you purpose and passion, motion and emotion.

But what do you really know about it? 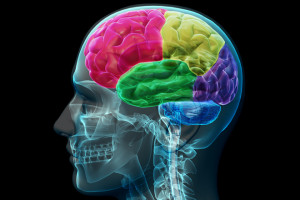 For centuries, scientists and philosophers have been fascinated by the brain, but until recently they viewed the brain as nearly incomprehensible. Now, however, the brain is beginning to relinquish its secrets. Scientists have learned more about the brain in the last 10 years than in all previous centuries because of the accelerating pace of research in neurological and behavioral science and the development of new research techniques.

Together, the brain and spinal cord make up the central nervous system. They are covered by three layers of membranes called meninges and bathed in protective cerebrospinal fluid, which acts as a “shock absorber” to help prevent injury. The largest part of the brain is comprised of the cerebrum, which is split into right and left hemispheres. The cerebrum controls voluntary actions, thought, speech, and memory. Most mammals have a relatively small cerebrum, but in humans it makes up most of the brain. This allows us to perform much more complicated actions than other species can. 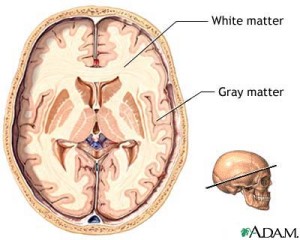 The cortex, or “gray matter,” is the outer layer of the cerebrum, made up mostly of the cell bodies of neurons, or nerve cells. Most of the brain’s work of processing information is done in the folds of gray matter. This is where the blueprints are stored that contain the vital information of our intelligence, memory, personality, emotion, speech, and ability to move and function in familiar and complex ways. Nerve fibers found in the cortex’s underlying white matter carry messages into the brain for additional processing. These messages are then relayed to other parts of the nervous system, which carry them out.

The midbrain, located deeper within the brain’s structure, acts as a cellular switchboard, keeping the different areas of the brain communicating with one another. This is necessary for the brain to carry out its most complicated functions, because its simultaneous commands require proper routing and coordination. 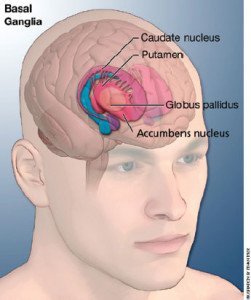 The central structure of the brain contains the thalamus, hypothalamus, and pituitary gland. The thalamus carries messages from the sensory organs to the brain. The hypothalamus regulates automatic functions such as changes in pulse rate, thirst, appetite, and sexual and sleep patterns. It also regulates the pituitary gland’s production of multiple hormones that play roles in growth, metabolism, fluid and mineral balance, sexual function, and the body’s response to stress. Four ventricles (cavities within the brain) contain cerebrospinal fluid, which protects the brain’s delicate structure, nourishes brain tissue, and carries away waste materials. 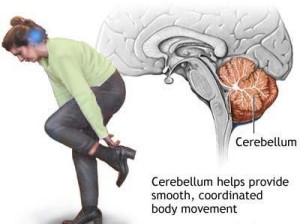 The back of the brain is divided into three parts. The cerebellum (Latin for “little brain”) is located below the cerebral hemispheres and controls our ability to make coordinated and balanced motor movements. The medulla oblongata, which connects the brain to the very top of the spinal cord, controls many of the involuntary actions of our bodies, such as the regulation of heartbeat, breathing, and digestion. The pons is a specialized band of nerve fibers that links the midbrain with the medulla oblongata and acts as a high-functioning switchboard. 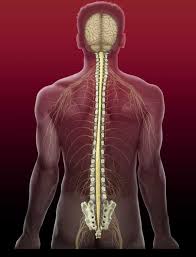 The spinal cord is a long shaft of tissue made up of neurons and supporting cells that is covered by meningeal membranes. Extending from the bottom of the medulla oblongata, the spinal cord is surrounded and protected by a stacked set of ring-shaped bones called the vertebrae, which together make up the spinal column. The spinal column is classified by region: cervical (neck), thoracic (rib cage/upper back), lumbar (mid-/lower back) and sacral (tailbone). Nerves branch off from the spinal cord, passing through the bony vertebrae and extending out to the organs and body parts to which they are specifically “wired.” In the spaces between the vertebrae is a rubbery material called cartilage. These cartilage cushions, called spinal disks, allow flexible movement between the vertebrae so that our backs can bend and absorb shock when we run, jump, and otherwise exert ourselves.